There are more than 2,300 coal‐fired power plants worldwide (with approximately 620 in China). Another 1,200 plants are in various stages of planning in China, India, Russia, Turkey, Uzbekistan, Cambodia, and Guatemala). Due to increasingly stringent environmental and pollution requirements, coal use for generating power in the U.S. is declining. However, coal remains the most common fuel source for generating electricity, and more than 90% of the coal mined in the U.S. is used for generating electricity.

Coal is a combustible, sedimentary rock that, as a fossil fuel, is more abundant than either oil or gas. There are several varieties of coal, but the most abundant is Bitumus coal, which is used for power production and to make coke for steel production.

Coal burning accounts for approximately 44% of the world’s carbon emissions. Regardless of the impact on water resources, air pollution, and climate change, many countries see it as a low‐cost source for producing electricity. Starting in 2000, global coal consumption has increased more than any other fuel.

The primary goals in monitoring various areas with a coal‐fired facility is to maintain the fineness of the pulverized coal, reduce the potential for explosive puffs that occur from an improper air‐to‐fuel ratio, reduce the amount of unburned coal in the boiler flyash, and accurately monitor the amount of CO2 and NOx leaving a stack. 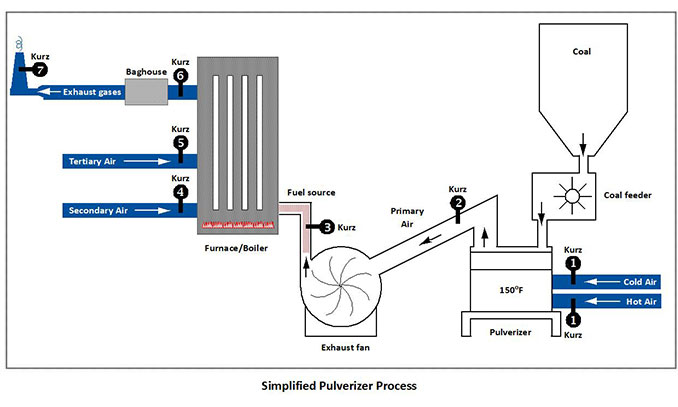 Coal‐fired power plants have several challenges in obtaining flow measurements, including large ducts, limited metering runs, poor velocity and temperature profiles, high vibration, high temperatures (up to 750°F), and dirty ash‐laden air. Kurz Instruments has a long history of experience with the coal industry. Bringing this expertise into upgrading a coal‐fired facility can be part of the program to increase boiler efficiency and reduce environmental impact. For example, when a 500 MW power plant using 50 Kg of coal per second improves its boiler efficiency by 1%, coal usage can be reduced by 0.5% per second or 43.2 tons/day (15,768 tons/year).

A Kurz thermal flow meter can be used to replace a differential pressure device. Differential devices must account for changes in temperature, pressure, and viscosity. However, the viscosity of air changes for about every 2.5% per 100 psi and about 2.5% per 100°F of temperature change, which translates to a potential 2.5% error rate. Thermal flow meters do not depend on viscosity for accurate and reliable measurements.
Flow metering applications include: